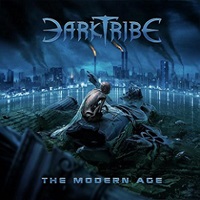 France’s Darktribe return on a new label Scarlet Records with their second album "The Modern Age". Melodic power metal with modern touches is the style this quartet employs, and I’m sure many will be able to pick out many of the Hammerfall, Stratovarius, and Sonata Arctica elements in terms of the high pitched vocals, guitar/keyboard hooks, and steady rhythms that encourage a lot of head banging, fist waving, and shouting.

Superior mixing/ mastering from Jacob Hansen brings a sharpness to tracks like "My Last Odyssey" and the happier/ playful "Rainwar", while the opening a cappella harmonies for "No Train to Earth" give off a "90125" / Yes vibe. The only downside to "The Modern Age" occurs mid-album with the ballad "Holy Water Day", as it’s not ideal for Anthony Agnello to strive for the tender lower notes in the verses against his preferred falsetto upper range. The band seems to gravitate towards a mid-tempo groove stance, keeping things very smooth and spacious which makes "Wild Call" and "Red House of Sorrow" early favorites.

Do I think Darktribe are setting the world on fire through their songwriting? Not particularly – but at this stage of their career, maybe they are still asserting themselves as far as what direction they want to go. Those who love the 1990’s/ early 2000’s European power metal bands, especially from Scandinavian countries, will probably dig "The Modern Age" – it’s nothing earth shattering but respectable nonetheless.