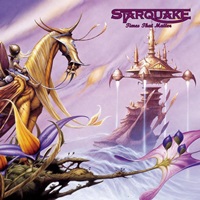 German progressive hard rock that definitely contains a lot of that 70’s Hammond Organ / Bluesy sheen – "Times That Matter" is Starquake’s second studio album, and should be delightful for those into throwback sounds and longer arrangements. Putting the 21 minute epic "Rise and Fall" as track 4 on an 11 song record speaks to the confidence of their musicianship, as Mikey the voice has a Blaze Bayley quality to his shrill delivery while the song contains numerous carnival-like twists and turns, Andi Pernpeintner leading through his Hammond Organ prowess and the rock / karaoke storyline.

Uriah Heep is the major influence, but I certainly hear a lot of 70’s period Kansas in terms of a lot of the chord progressions that Starquake use on "Close Encounter" (mirror image to "Paradox" from their "Point of Know Return" classic) where the band blend progressive rock with classical touches. The quintet even throw a little bit of 80’s new-wave meets metal muscle at you on "The Needle Lies", the drumming very danceable while the distortion on the vocals can be quite exotic. There’s no disputing the talent on display – these guys can certainly play and make sure to keep a lot of their hooks down to earth amidst the musical jamming on certain ideas.

The problem lies in that too much to consume question that plagues a lot of artists these days. Just because you can put 79 minutes of music on a CD doesn’t mean you have to- and while "Times That Matter" is only 73 minutes, it makes the second half of the album a tough sell to get through. One ballad too many with "Whatever" as well as the eerie "I’m Goin’ Mad (You Comin’?)" could have seen the cutting room floor and this would improve the product just a bit.