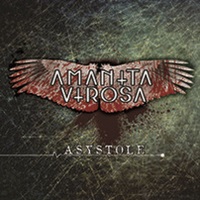 Hospital metal is a new term to this journalist – and the promo photo from Finland’s Amanita Virosa contains band members in wheelchairs as well as holding medical supplies, so kudos to their aim to live their craft. "Asystole" as a debut album straddles the lines between modern and melodic death, occasionally hitting Children of Bodom meets Arch Enemy catchiness between the keyboards and guitar parts, while the vocals fluctuate between growls and blackened screams.

The sextet keep much of their material in solid mid-tempo groove mode, revving up the adrenaline in certain speedier blast bursts. "…Of Failing" and "Suck the Poison" easily fall into this category, although the latter contains occasional quieter transitions that set the listener up for the next magnetic death explosion. At other times the keyboards and guitar melodies give off a more cinematic presentation, as "No Life King" is melodic death par excellence, the gang background vocals during the chorus sure to promote a lot of audience participation while the lead break has more of an older, bluesy Metallica vibe.

The duality of vocal approaches – even if not adding that clean third channel – gives Amanita Virosa much more dynamic exploration through these arrangements. "Dead Inside" benefits tremendously from the discernible death growls that switch in an instant to the paint peeling screams. The 9 songs run the gamut in terms of symphonic elements and standard melodic death touches – even including one pure Finnish sung cut that contains some killer progressive time changes that made me think of Dimmu Borgir meets King Diamond.

Not following the pure Scandinavian blueprint of In Flames or Dark Tranquillity is beneficial for "Asystole" in long term appeal. A band to watch for sure.