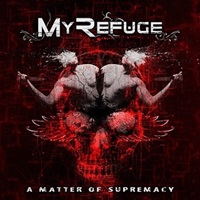 MY REFUGE – A Matter of Supremacy

Starting as a solo project from guitarist Mauro Paietta in 2010, two EP’s later My Refuge has developed into a full-fledged group, signing with Bakerteam Records for this full length album "A Matter of Supremacy". This Italian quintet perform in a familiar semi-power meets heavy metal manner, vocalist Davide Vella possessing helium lung capacity it seems during a lot of the trailing notes and chorus portions of Queensryche and Crimson Glory-oriented efforts like "The Cage" and the follow up "Calling of the Wind" (check out the note holding abilities during 4:08-4:25 of the latter).

Even during a ballad such as "Endless Night", the tender soloing from Mauro and compatriot Simone Dettore keeps the arrangement in line with classic Helloween or Blind Guardian over something sappy, even the twin harmony aspects give off a neo-classical facet that reaches back into their cultural past. Vocal choir action opens "The Raven" as the guitar lines weave around the melodies, another track that has a definite German metal flavor, I love the progressive drum tempo from Valerio Ferrari that gives off a little bit of an outer space texture. And for those that love those lightning fast guitar runs, closer "Somewhere" will be your favorite.

At other times I feel that certain songs are a little too over dramatic and could use a little reigning in – "Empty Room" probably the easiest reference to this aspect, as Davide choose to go for more cinematic melodies against the acoustic guitars, and I feel that My Refuge doesn’t have to be so obvious in channeling that emotional context. The good outweighs the bad, so overall "A Matter of Supremacy" is ideal for those who love a lot of classic metal riffing against the 80’s power movement that brought Helloween and Crimson Glory to various degrees of popularity.