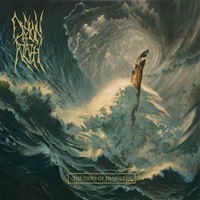 New Zealand may not be hot on the global radar screen for heavy metal, but Dawn of Azazel are one of its finest exports. "The Tides of Damocles" is the quartet’s fourth album, and shows no signs of relinquishing its groovy death metal stance. Occasionally throwing in jagged chord combinations against the caustic vocal roar, songs like "Vassalplasty" and "Progeny of Pain" possess that Coroner/ Voivod feel if taking through a death metal platform. At other points the Gojira and Meshuggah elements careen against each other – check out the crazy blasting/ guitar combinations for "Irresistible Foe" as well as "Controlled Burn" for prime examples of this fierce sonic blitzkrieg.

Drummer Jeremy Suckling enjoys the challenge of keeping things steady and emotional while also being technically sharp and explosive. "The Eagles Grasp" has these dive bomb parts where he cuts the tempo in half, then moves to a traditional groove feel before his double bass kicks and instincts propel the lead break to heights of aggressive ecstasy. Bassist Rigel Walshe has a sandpaper-ish, militant edge to his vocals, taking in everything from Meshuggah to Sepultura for inspiration, but never reaching the super low growls that could make everything indistinguishable. The guitar work from Joe Bonnett and Nik Davies can be slow and steady one measure, then bouncy and bulldozer-oriented the next – as "Damocles" illustrates in a tight 2:47 window.

Choosing to record this record at Mana Recording Studios in Florida (Cannibal Corpse, Hate Eternal) proves the band’s desire to be considered in league with their death contemporaries – and I don’t think those who desire a little progressive jaggedness in their death riffs and roars will be disappointed in "The Tides of Damocles". If you love Immolation and the aforementioned comparisons, Dawn of Azazel is a welcome addition to your collection.