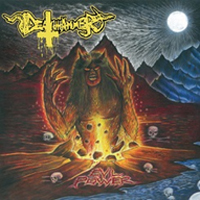 If you are into thrash and haven’t heard Norwegian two-piece Deathammer, you are seriously missing out. They have been around 10 years or so, releasing plenty of EPs etc and with ‘Evil Power’ under their bullet belts now have 3 full-length albums to speak of. I remember interviewing Nekromantheon a few years ago for ‘Rise, Vulcan, Spectre’ and they advised me to check these guys out if I was looking for the best in Norwegian thrash. You may have seen their logo before on the cover artwork of Darkthrone‘s 2007 album F.O.A.D.

In terms of sound, Deathhammer have the manic balls-out speed of Whiplash or Razor but what makes it work so well is that they also have the insanity of the Teutonic thrashers circa 1985 – think Kreator around the time of ‘Endless Pain’ or ‘Sentence of Death’ era Destruction. Think about it – it is a recipe for glory and greatness!

Those of you who are already familiar with this act and may have bought previous albums such as ‘Onward to the Pits,’ will be happy that there has been absolutely zero change in direction or sound. Deathhammer have hit on a formula that delivers exactly as it should so all that remains of for them to cheep churning out the evil.