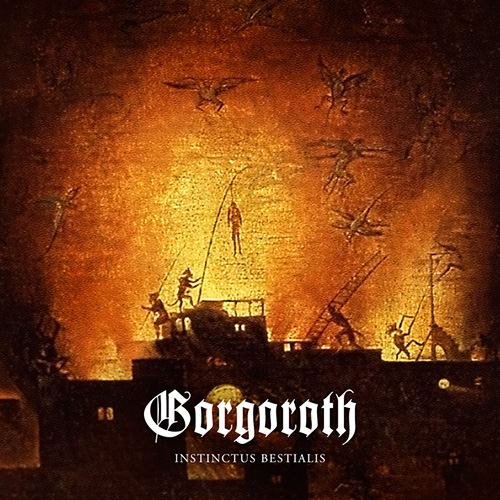 Although I have been a great fan of Gorgoroth over the years, I have never had any time for the latest, post Gaahl and King, version of the band. I bought and hated ‘Quaint Possum’ and I walked out of one of their gigs after two or three songs.

I am happy to say that they seem to have finally found their feet on Instinctus Bestialis. Firstly and most importantly, the songs are much better than anything Gorgoroth have released since 2006. Infernus has always had an extremely musical side and it has made itself shown here through classic riffs, great structures and intelligent song-writing. The solos (what few there are) are top class. And while this album isn’t as brutal as some might like, it still has a strong darkness and ritual feel. To be honest though, I think the songs are good enough that we can sacrifice a little screaming hellfire. This album rocks more than Gorgoroth has ever rocked before and it is a welcome evolution in sound as far as I am concerned.

Thomas Asklund is solid as a tombstone behind the kit and Frank Watkins is a dark powerhouse on bass, but after Infernus the plaudits must go to new vocalist Atterigner. His voice is exactly right for Gorgoroth and his debut performance for the band is incredible. At times he reminds me of my favourite BM vocalist Mikko Aspa, and there is no greater praise than that! Perhaps the only thing wrong with this album is some of the lyrics as it sometimes feels like some variation of ‘Praise Satan’ is used for every single chorus.

One thing that has annoyed me about previous Gorgoroth releases does not rear its ugly head here. In the past they sometimes had experimental sections to the songs, featuring noise elements or just riffs that went on far too long in some misguided attempt at creating atmosphere. None of that here thank Satan!

So there you have – an absolutely killer BM album that also rocks out like nothing you’ve hear before. This will easily be one of the top releases for 2015.