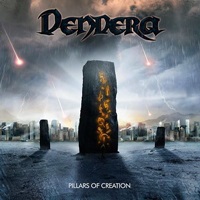 This UK band’s debut album "The Killing Floor" from 2013 is an impressive traditional power metal effort, making me think of the greatness of Megadeth and Iced Earth while also having that English charm we’ve come to know and love through and through. To say the follow up "Pillars of Creation" is highly anticipated may be the understatement of 2015. Fear does set in though, as there have been many bands that can deliver the goods the first time out, but struggle to retain that fire and passion a second time. After multiple playbacks, Dendera doesn’t suffer any signs of a sophomore slump through these 8 songs.

Certain aspects of the guitar riffs and transitions do reach back into the Iron Maiden catalog – the instrumental section of "In High Tide" most notably – but never to the point where you are going to cry sellout or rip off. The musicians place a priority on cohesive writing as to make all the moving parts flow sensibly, the spotlight moments an added benefit and never self-serving. Otherwise a lot of the writing and output has more of a mid-tempo versatility than their debut, allowing vocalist Ashley Edison a chance to showcase all facets of his high quality delivery. Channeling everything from Bruce Dickinson to Joey Tempest plus a little bit of Matt Barlow grit, he really outdoes himself on "Disillusioned" and catchy anthem "Unholy", reaching back and belting out the words full force.

Gelling together through live performances Dendera appear to be writing material that’s a touch heavier while remembering the hooks and solid groove factor that drives heavy metal. Sure you may get a little bit of a modern feel for the down-tuned bounce that surrounds the lead break for the 8:45 closer "Edge of Tomorrow", but the band place clean guitar parts and an impressive, emotive solo from guitarist Stephen Main that keeps their power chops in place.

It’s no wonder they’ve gained a lot of traction through the press, radio, and plenty of prime time touring slots in their home country. "Pillars of Creation" should prove to the world that Dendera can hang with the big boys.