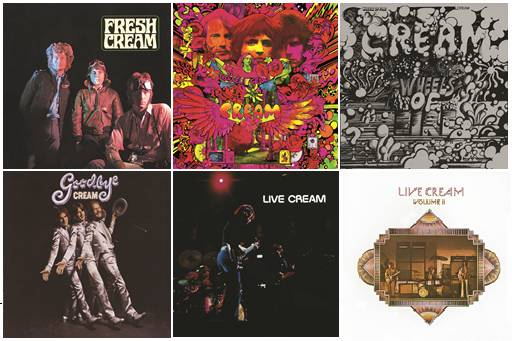 Up next, the vinyl re-release of Cream’s complete back catalogue of studio and live albums (1966 to 1972).

Most of you out there know at least something about this seminal act, but just as a refresher – Cream were a 1960s British Rock Supergroup Power Trio consisting of bassist/singer/harmonica-player Jack Bruce, drummer Ginger Baker, and guitarist/singer Eric Clapton. They came about because each of the artists involved thought the other two were the best at what they do in the British scene. Pretty much everyone else agreed too – from journalists to the fans who inscribed ‘Clapton is God’ on the walls around London. The only logical thing to do, then, was to get together and form a band, and that is exactly what they did. Cream is widely regarded as being the world’s first successful supergroup, selling over 15 million albums worldwide during their career.

Their sound was born from the UK blues explosion, but quickly moved towards hard rock, incorporating aspects of the psychedelic themes that were prevalent at the time – both lyrically and musically. Jack Bruce’s operatic vocals added an air of poetry, neo-classical eclecticism and drama that worked beautifully with Clapton’s Blues-based virtuosity. Behind the kit, Ginger Baker’s jazz-influenced drumming provided the engine, while also setting bench march that would still stand today.

First up we have ‘Fresh Cream’ (5). As an opening statement, it was a potent offering. Songs like ‘N.S.U.’ showed what Cream could achieve in terms of song-writing and the handling and arrangement of Blues standards like ‘Spoonful’ began to hint at the levels of musicianship the band could reach, both individually and together.

Next up, ‘Disraeli Gears’ (6) opens with the classics ‘Strange Brew’ and ‘Sunshine of Your Love.’ The psychedelic angle had been turned up a notch as had the band’s reliance on their own material, both with devastating and lasting effect on future generations of musicians and fans.

The contribution of Cream to the way things are done in all rock-based music can never be underestimated. They pioneered the use of the wah-wah pedal and were a major influence on Jimi Hendrix, for example. Cream were the first band to include drum solos on a rock album. Even more importantly, licks and tricks, such as Clapton’s solo style, Bruce’s bass runs and Baker’s drum fills added new grammar and vocabulary to the language of modern rock – a vocabulary that is now taken for granted, but much of which didn’t even exist before Cream. The were the bridge between the Blues Revival and Black Sabbath, Led Zepplin and Rush, and we all know how important those bands were to what came after.

Cream’s third album, ‘Wheels of Fire’ (6), was the world’s first platinum-selling double album. You have probably heard songs like ‘The White Room’ over and over, but it is well worth going back to them to discover all that they have on offer. Perhaps you were younger then and didn’t give them the time they deserve. This is no crime, seeing as these songs are older than most of us and have been around all of our lives – but it is something that is easy to remedy. Go back and listen to them again. Each listen offers something new and incredible. This is because on top of the musicianship and technical prowess, Cream became superlative song-writers. On top of that and their individual skills, years of playing together live and in studio meant that they were working seamlessly as a band. The songs have dynamics – at times the vocals take precedence, while at other times the drumming is the star. Check out the percussion on ‘Those Were the Days’ – original and distinctive, and yet it never took over. Then Clapton steps forward with yet another face-melter and Bruce’s vocals take us back to the melody.

Cream were encouraged to do one final album before they disbanded – the aptly-named ‘Goodbye’ (5). This was made up of 3 live recordings and 3 new tracks, including the massive hit ‘Badge.’ The live tracks all showcase a band who were in their element jamming out the tracks and creating a groove, where almost in jazz style, one voice would come forward and then blend back into the mix. While the tracks on offer are all excellent, modern listeners might not have patience for 10 minute blues jams. At times they have you exclaiming that Clapton is the greatest guitarist, while at other times listeners might reach for the fast forward.

‘Live Cream’ (5) volumes I and II were released posthumously in 1970 and ’72. They provide an excellent snapshot of the band, but again, push the patience of those, who like me, prefer the band’s self-penned material over their rendition of Blues standards, and who prefer the best they could do at a mixing desk to whatever they could blast out from stage. Having said that – both are still great albums, as you can see from the score above.

Overall then, this is an excellent series from a band who single-handedly changed the face of rock music forever.  There are tracks and playing skills here that remain unequalled for quality to this day and that is something one could only say about a handful of bands in existence.