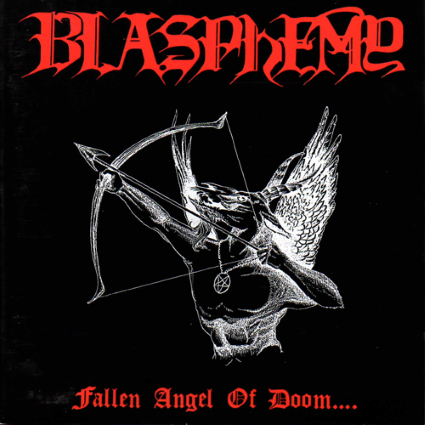 The Canadian black metal squadron that is Blasphemy hardly needs any introduction. Within the metal underground, it is considered a legendary band and a pioneer of what has later on been termed war metal. Ferocious, morbid, and inhumanly aggressive metal of the highest order, you fucks! The infamous "Fallen Angel of Doom…" album was recorded and originally released way back in 1990 and still stands tall as one of the best and most bestial black albums of all time. A lot of stuff has been written about this album over the years and it seems to me that this is one of those releases that you either worship or loathe, which is exactly the way it should be, if you ask me. "Fallen Angel of Doom…" is not some mediocre bullshit spawned by a bunch of weenies. It provokes strong reactions, both positive and negative. While the majority of latter-day war metal bands have failed to impress me, Blasphemy is another matter entirely. For one thing, and I cannot stress this enough, "Fallen Angel of Doom…" is not only catchy, but it also has atmosphere to it. A desolate, hateful, and strangely dark atmosphere, if you will. The otherworldly vocals, the devastating drums, the chaotic solos, the crushing riffs, and the oppressive atmosphere are what makes this 10-track effort such an essential release. I am not merely talking about the historical value of this album, but rather the actual music itself. It is also more varied and dynamic than some people give it credit for. As Dayal Patterson points out in "Black Metal: Evolution of the Cult", the "Fallen Angel of Doom…" album is a genre milestone. If you missed out on this earlier on then now is your chance to familiarize yourself with this sick and twisted album.