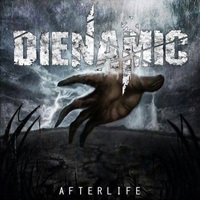 Dienamic is a Norwegian quintet that straddle the lines of thrash and metalcore on their second full-length "Afterlife". I’d say the musical foundation leans more towards the former, while vocally and transitionally at times the latter aspect comes into play. The band hones in on strong hooks right out of the gate, keeping a lot of this material focused and tight – 9 of the 10 tracks do not exceed 4:13, while the closer "The End" at 7:21 is more of a darker, emotive epic ballad.

Exodus and Sepultura come to mind when checking out a lot of the triplet framework and trailing notes used on "Innocent Gun", while "Generation Reboot" is an all-out blood pumping number, the rhythm section transitioning seamlessly between almost blast beat oriented work into solid power groove parts – probably where some of the Lamb of God influence comes into the forefront. Vocalist Gustav Harry Lindquist has a little bit of a Teutonic warble going on with his phrasing and enunciation, especially evident on songs like "The Reaping" and "Overthrown", as if Chris B. from Grave Digger may be fronting the band. The guitar work of Eivind Kjær Killie and Stein-Odin Johannessen is razor sharp, able to keep things flexible from speedier riffing to mid-tempo chugging sure to align well when Dienamic performs this material on the live front.

I’d say this is a solid meat and potatoes oriented band, they aren’t exactly ‘wowing’ the world in terms of their originality, but you can’t fault the execution. Good for some fist pumps and head banging moments, and isn’t that what the thrash movement is all about?