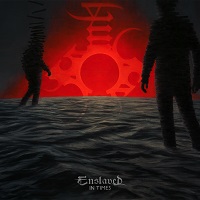 With Emperor inactive, Enslaved occupies no. 1 spot in progressive black metal in my book. Not content with serving pure black metal and drawing from many sources inside and outside the metal genus, Enslaved have always crafted quality work, work that is not pretentious, artistic, yet catchy. "In Times" (IT) is no different. Under an admittedly crude album name lies a behemoth. It is already universally regarded as one of their best albums and I see no reason to dissent from this opinion. In fact, the album is so constructed, that anyone into any kind of genre will enjoy it very much. True, it does contain, in comparison to their more progressive work such as "Vertebrae", a lot of black metal rasps and some intense blastbeats in places. But although they are integral to the whole, they hardly dominate.

Most of the material can safely be classified as progressive heavy metal, though thrash (One Thousand Years of Rain) and death (title cut – early Obituary?) riffs sustain a motif or two, here and there, backed by a serious supply of the well-placed pleasant clean vocalizations. I have read somewhere that "One Thousand Years of Rain" eclipses the album, and, while enthusiastically agreeing with the assessment of quality, I do not find it to be better or worse than the rest. If anything, IT is even throughout. As if it were a matter of tradition, the album contains no weak spots. Every song is chockfull of great riffs and hooks, the sound is cold but clean but has just a right tinge of muddiness necessary for the black metal, while surprising with amazing clarity on the monumental fantastic "Daylight". My personal favorite may be "Building with Fire" (reminiscent of Motorhead’s "Orgasmatron") but it’s probably because I really feel what is being sung and expressed, plus the vocals are sick, the vocalist (I won’t attempt to distinguish which of the three employed does it) sounds like he was being possessed precisely at the moment of recording the song, while profusely and vigorously resisting the take over of his body. The twists and turns in this track alone will make your head spin yet it is the least varied of the six on the album.

These guys are just professionals, but not to the point of predictability, it’s just that, at this point in their career, you could safely introduce Enslaved stocks on the market, and if the band members pick up this idea and implement it, you’re welcome. But they make it sound so easy, like there was nothing to creating captivating music each track at an average 7 minutes in length. Perhaps the biggest factor here is that you can hear they love what they’re doing from every note. For proof, check out the Mastodonian beginning of "Nauthir Bleeding", which gives way to some latter Death riffing, to these ears, anyway, or the dissonant ending of the title cut recalling recent Gorguts. No doubt, the extensive musical and touring experience of band members plays a role. But we all know of great bands with tons of experience and backlog of material, some of it classic, who just aren’t there anymore, somewhere they lost what made them great.

Not so with Enslaved, who seem like they have only just begun, as though they have an unlimited supply of music in their heads and hands for years to come. The enigma of their genius will continue to baffle me as I give it the only score possible at the risk of forthcoming accusations of bias. If I am biased on the account of great music, thank you for the compliment, for this is utterly masterful.