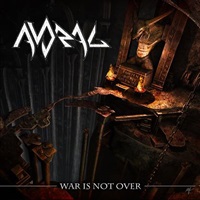 This Italian quintet Avoral have been active since 2012, releasing "War Is Not Over" on an independent basis last year before being picked up by Club Inferno Entertainment for a wider release. This 7 song record crosses the lines of epic heavy metal and power, as the band also isn’t afraid to include folk or black elements in certain tracks to give "Ivory Gates" and "Unwanted Treason" dynamic appeal.

Blind Guardian and Hemidall are two acts that come to mind when taking in this 40 minute album. Decent lead break work, but the main melodies are nothing to really get excited about as this is standard fare for power metal folks. The title track for instance that closes the album intertwines a lot of crunchy riffs and melodic refrain underpinnings while the double bass tapping has a lot of synthetic qualities – vocalist Frank warbles in various low and high mannerisms that befit their epic qualities. There’s nothing wrong with a lot of sweeps and note flourishes during the instrumental sections – I guess I struggle though to find anything meaty in the main riffs and hooks that keeps me coming back for subsequent, more intense listens.

So as a result, Avoral sits in that ‘average’ region where I’m sure they will gain some appeal but not enough to really impress the majority of epic, power metal followers. "War Is Not Over" as a debut record isn’t anything to really raise a tall mug to sing praises of, so approach with caution.

TOTAL DEATH – The Pound of Flesh

NO RETURN – Fearless Walk to Rise