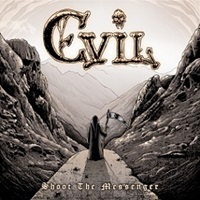 Originally a part of the Danish 80’s heavy metal scene, many in the underground probably remember "Evil’s Message" as an important EP for their spin on NWOBHM helped put this country on the map along with Mercyful Fate. Splitting up in the mid 80’s, drummer Freddie Wolf felt the need to put out more material as Evil – recording all the instruments, writing all the songs, and allowing longtime friend Søren Nico Adamsen (ex-Artillery) to handle the vocals on a full-length album, "Shoot the Messenger".

This is very basic heavy metal- no frills and classic in terms of head banging riffs, simple choruses, in line with their Accept and Judas Priest roots. "I Could Be Your Hero" has that mid-tempo shuffle that should get fists in the air, while "Big Show" has more of a playful attitude regarding music talent in today’s reality/ instant gratification marketplace, the slower solo parts very much another Teutonic nod to everything from The Scorpions to Wolf Hoffmann. Søren has a lot of sarcastic attitude during spots on this record – metal to the bone on "Move" but I do believe that his high screech could be like nails on the chalkboard to some.

In the closer "World War 666", there are even some lyrical and musical tips of the cap to the mighty Iron Maiden (mirroring my favorite song of their catalog, "The Prisoner"). Evil doesn’t apologize for its old school stance – so those who love the early to mid-1980’s classic style, "Shoot the Messenger" should hit your target sights. 8 songs in a tidy 32 minutes, I’d love to see Freddie flesh out Evil anno 2015 with a full lineup and get some festival dates going – as he still has a lot to say and deliver in terms of new material.