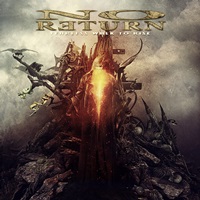 NO RETURN – Fearless Walk to Rise

My approach to significant lineup shifts in metal bands still brings about trepidation, because you never know what you are going to get in the final outcome on that follow up record- especially if a band has an established sound. France thrash/death act No Return on their ninth studio album "Fearless Walk to Rise" still have guitarist Alain Clément and 8 year veteran bassist David Barbosa in their ranks – but three new musicians for second guitarist Jérome Point-Canovas, drummer Joël Barbosa, and vocalist Mick Caesare will certainly affect the chemistry and interplay.

Outside of a short 1:13 "Ascent" intro, the other 10 tracks showcase No Return in their established preferences – heads down aggressive riffing, tempos that are generally mid-tempo to speedy in parameters and vocals that are mostly of the death/ semi-growl variety. Alain and Jérome team up for great harmonic possibilities, often paralleling some of the best Bay Area thrash meets Swedish melodic death work in the very Soilwork oriented "Sounds of Yesterday". The general riffing has a lot more power forethought and intricacies – incorporating a lot of speed trilling and quick hitting, clean introspective parts to make "Paint Your World" a mid-album standout because of its Heathen/Metallica qualities.

Mick has a serviceable range but doesn’t really sound out from the hordes of other death/raspy metal singers who front bands these days – keeping up to the galloping nature of "Stronger than Ever" while being more forceful in a Sepultura meets hardcore platform for "Fearless". Producer Jacob Hansen gives No Return the best tones and production values possible – emphasizing the band’s thrash/death instincts and keeping things solid on all fronts.

A transitional album only in the sense of these musicians getting comfortable with one another, "Fearless Walk to Rise" has the adrenaline and aggression plus guitar hooks and harmonies necessary to deliver one of the best releases in their career- and prove that not all French bands worship at the Gojira altar.