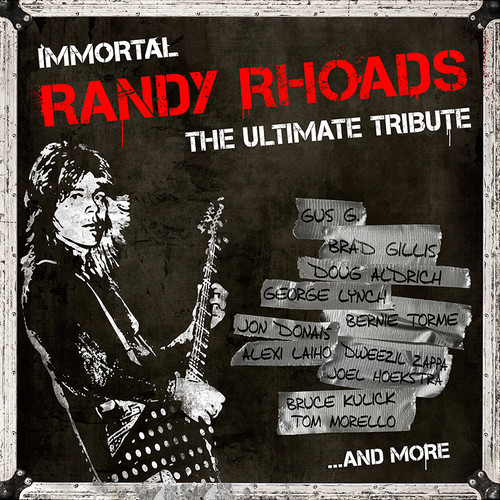 This 11-track tribute album to the brilliant and sadly-missed Randy Rhoads (Ozzy Osbourne, Quiet Riot) recently came out and features the talents of such classy musicians as Rudy Sarzo, Vinny Appice, Tim "Ripper" Owens, Doug Aldrich, Brad Gillis, Bernie Tormé, Gus G, Bruce Kulick, and a whole bunch of other well-known names. First of all, I found it quite cool that people who are or once were part of the Ozzy Osbourne-camp such as Sarzo, Gillis,  Tormé, and Gus G took part in recording and putting together this album in the sense that it gives the whole thing an aura of "familiarity", if that makes sense. Having someone like Sarzo who actually knew and played with Randy handle bass on all 11 tracks gives the album some emotional depth and authenticity somehow. Anyway, I digress. Let us get on with the actual music itself, shall we?

The first song, "Crazy Train", featuring Serj Tankian (System of a Down) on vocals, is unbelievably horrible and lame, and I was totally disgusted by the whole thing. It has nothing going for it and everything about it sucks except for Sarzo’s bass lines. Unfortunately, the same thing applies to "Mr. Crowley" featuring Chuck Billy (Testament) on vocals. I nearly shat myself when I heard it. A travesty!

Luckily, the remaining 9 tracks are much better and way more decent. Tim "Ripper" Owens (ex-Judas Priest) handles the vocals on 8 of the songs, one of which is the Quiet Riot song entitled "Killer Girls" while the remaining 7 are Ozzy tracks from the "Blizzard of Ozz" and "Diary of a Madman"-eras. Needless to say, Owens pulls the whole thing off nicely and I really like his vocals. Listening to Sarzo’s bass lines is also a treat. The other Quiet Riot cover ("Back to the Coast") featuring Bruce Kulick, Frankie Banali, and Kelle Rhoads is also pretty cool. Having Gillis rip though "Suicide Solution" is awesome while Tormé’s take on "Flying High Again" rules.

In the overall perspective, "Immortal Randy Rhoads" is a solid and entertaining tribute album. Nothing will ever compare to the original versions, but this is one of better tribute albums I have had the pleasure of listening to, in large part thanks to the vocal talents of Tim "Ripper" Owens. Steer clear of "Crazy Train" and "Mr. Crowley", though!