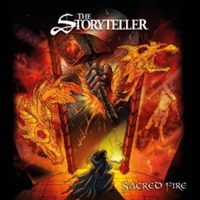 Hitting their collective creative second wind, "Sacred Fire" is the sixth studio album from Swedish power metal band The Storyteller, and second since their eight year hiatus during the late 2000’s and early 2010’s. The template hasn’t been modified much from 2013’s "Dark Legacy" – you’ll get a 12 song album that intertwines speedier/ gallop oriented harmony laced numbers such as the title cut and "Serpent Eyes" with warrior-oriented material that has cultural/ epic elements tailor made for festival consumption like "Ferryman" and the aptly titled "In Search for Treasures, Stones and Gold".

L.G. Persson as a vocalist has a knack for phrasing and tonality that combines Messiah Marcolin with possibly the more dramatic singers in the power field from early Nocturnal Rites to current Tad Morose. The ballad "Coming Home" may not necessarily be in his wheelhouse, but the whispering trail offs and emotion behind things allows guitarists Jacob Wennerqvist and Marcus Backlund ample opportunity to melt the listeners’ minds with a tearful inducing lead break. The quintet just seem to know when to ride into the Wizard meets Maiden sunset, picking the right combination of gallantry, choirs, and mid-tempo fierceness that maximize the requisite head banging and fist pumping most listeners will do when they hear this material. Favorites currently flooring my brain include opener "As I Die", "Curse of the Seven Seas" and the Nocturnal Rites oriented follow up "Let Your Spirit Fly".

The Storyteller are not reinventing the power metal wheel, they are definitely European-oriented in terms of their approach and outlook – and that’s perfectly fine by me. Sometimes you need to hear lyrics like ‘fighting with pride- with God by their side’ or ‘slayer of all… that stares into her eyes’ that take you away from your daily doldrums and set your imagination back into legendary battle oriented stories. "Sacred Fire" proves that these Swedes are going to fire their twin guitar harmonies and unapologetic power metal ‘til the day they perish.

GLUTTON FOR PUNISHMENT – Lying in Torment