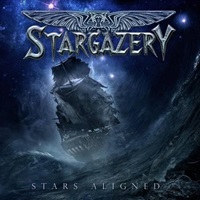 The second album from Finnish heavy metal act Stargazery marks the return of a classic style that has its roots in Tony Martin-era Black Sabbath, Dio, the dramatic aspects of Whitesnake, and even guitar-hero musicians like the late, great Gary Moore. The band waste no time getting to the major musical hooks and then wrap them around equally intoxicating melodic choruses that cement themselves in your head for days on end. I’m still screaming at the top of my lungs ‘She’s an angel of the dawn!’ from the aforementioned "Angel of the Dawn", the lead break from guitarist Pete Ahonen respectful of the slower, anthem-like feel as if channeling Iommi and Moore into one.

The band place as much reverence for Deep Purple/ Rainbow style keyboard tones as they do thick guitar sounds – check out "Missed the Train to Paradise" or the slightly exotic "Dim the Halo" for their ideal use to enhance the overall final arrangements- the latter featuring some killer pitch bends amidst the speed and intricacies from Marco Sneck. Ex-MSG vocalist Jari Tiura has a smooth delivery and potent high reaching capabilities, most evident on highlights like "Bring Me the Night" and the softer to heavy contrast within "Academy of Love". The album ends with two versions of the Cher classic "Dark Lady"- the first done in English while the second is performed in their native Finnish tongue. At first I worried how they would make this more of a Stargazery version, but I think they injected the right electric parts while keeping the campiness and dramatic orientation of the vocals to differ from the typical choice most heavy metal acts seem to routinely strut out.

I was already a fan of their "Eye on the Sky" debut, and I believe "Stars Aligned" is a logical, broader follow up that proves the timelessness of certain sounds and particular classic bands.