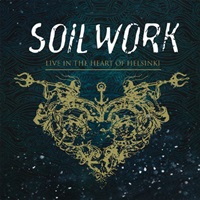 I remember when bands used to issue live albums after four studio records, often to eat up label contract responsibilities or buy a little breathing room off the touring circuit so that a band could maintain some sort of sane life. Sweden’s melodic death meets groove juggernaut Soilwork felt the time was right after nine full-lengths and almost 20 years together to align the stars and record a fervent headlining set on their Helsinki, Finland date of "The Living Infinite" touring cycle.

Trying to provide as broad of a cross section of their life’s work can be a challenge, but I think the quintet do their best to balance out the tried and true fan favorites with their current work. 7 songs from "The Living Infinite" double album make the grade, an effort that I fully believe will gain more appreciation down the line because it is quite a lot of musical information to take in for one sitting – never mind multiple engagements. Of these newer songs, I find opener "This Momentary Bliss", occasionally black-ish "Spectrum of Eternity", and mid-tempo crusher "Rise above the Sentiment" possess all the requisite hooks, dual harmonies, and good cop/ crushing growls/screams from Björn ‘Speed’ Strid to level any audience. All 9 albums receive at least a one song airing – furthering the band’s belief in all of their material over their decades of existence.

Reaching back into the early days of Soilwork, we do get some killer renditions of "Sadistic Lullabye" from their debut "Steelbath Suicide" and the title track from the follow up "The Chainheart Machine" – reminding me of why their speedy brand of melodic death/thrash put them on the map in the first place. Certain songs Soilwork can never get away from in terms of their hits – definitely spread out from early favorite "Like the Average Stalker" to "Follow the Hollow", as well as the double shot of "As We Speak" rolling into set closer "Stabbing the Drama". Björn elicits all the proper chanting, call and response action necessary as the music rolls on, the band giving us 23 songs and over 100 minutes of their discography.

Probably one that will be best ‘viewed’ over pure ‘listening’ (as these CD/Blu-Ray sets tend to be), I know for certain that Soilwork deserve their space in the headlining circuit because of their steady energetic outlook and ability to write arrangements that have lifelong impact.

LUCKY BASTARDZ – Alwayz on the Run