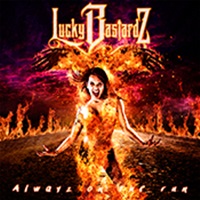 LUCKY BASTARDZ – Alwayz on the Run

An Italian four-piece born in 2008, Lucky Bastardz has taken the opportunity to play internationally on festival and local stages for a variety of hard rock and heavy metal acts – both of the melodic and extreme variety. "Alwayz on the Run" is their third full-length, a 12 track effort that delivers just under an hour of bluesy / sleazy hard rock that fuses the attitude of the Sunset Strip and the chops of a lot of the current Scandinavian brigade- along with an eye on the American modern acts currently reigning the radio airwaves.

"Back on My Feet" has an interesting modern groove twist during a lot of the verses from drummer Mark and a boatload of gang background vocals that provide contrast to the adrenaline-laced chords and main vocalist Titian’s gritty, raw yet surprisingly bluesy voice (David Coverdale and Paul Shortino would be proud). Occasionally nicking certain familiar patterns (a few licks on "Tiger Hostel" are just a variation on Iron Maiden’s "Hallowed Be Thy Name" main echoing refrain), the cinematic keyboard elements do not help a ballad like "The Sign on the Wall" to stand out against the Alter Bridge / Shinedown material that dominates the charts. Hardcore Superstar meets Mötley Crüe comes to mind on the truckin’ "Wolf’s Lair", while bassist Mr. TNT gains a nice solo segment on the more adventurous "eDrugs".

I think the variety of material and dynamics on display aids to the overall appeal of the record – Lucky Bastardz aren’t stuck in one particular style of song or tempo, which allows the listener to comfortably handle all 12 songs. Those who desire just a let loose party record at street level, "Alwayz on the Run" could be the soundtrack to crank at peak volume.