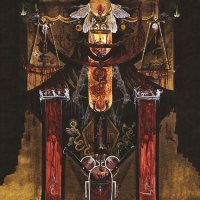 DEATH KARMA – The History of Death & Burial Rituals part I

Slovakian/Czech duo Death Karma are in fact 2/3rds of Cult of Fire, so we can reasonably expect an accomplished and well put together piece of work. "The History of Death & Burial Rituals part I" does not disappoint in that regard. The production is modern and clear, but maintains the power of the tracks, while at the same time helping to create a ritualistic and occult atmosphere.
Thematically, we are actually presented with the history of death & burial rituals from around the world. Interesting subject matter no doubt, and the guys have done their research, but not much use without a lyric sheet, I’m afraid.
Musically, Death Karma offer a schizophrenic mixture of melody, epicness, soothing passages and brutal blasting, and each of these elements works well. The problem is though, that they tend to work as well or better in isolation rather than as sections of the songs they come from. The problem for me is that the songwriting approach is too labyrinthine, too complicated for my liking. So while I really enjoyed sections of this record, it ultimately left me as cold as a corpse laid out on a Tibetan hillside as part of a sky burial. This is a problem I have found with Czech bands before. They seem to enjoy tunnelling away into song structures that devour their own tail, trying to outdo each other in terms of complexity. For my part, this lack of directness means the music does not really get a chance to create a spell and thus it becomes more inaccessible.
Ultimately, this may well interest those who like things twisty and challenging. I’ll stick to Cult of Fire…