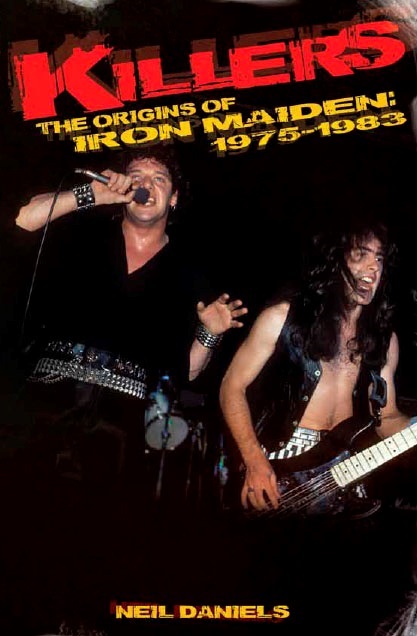 I cannot praise author Neil Daniels enough for writing this excellent and highly entertaining biography on the early days of Iron Maiden. Needless to say, Iron Maiden is one of the very best heavy metal bands of all time, and I do adore most of their work, but the first two albums featuring vocalist Paul Di’Anno, namely the self-titled debut album and the follow-up "Killers", are masterpieces by my reckoning, and they are by far my personal favorites by the band. Let there be no doubt about that. Reading a book that focuses specifically on the early days of Maiden was therefore pure bliss from start to finish.

Daniels has left nothing out and "Killers – The Origins of Iron Maiden: 1975-1983" comes across as both well-researched and extremely passionate when it comes to chronicling how Steve Harris was struggling to put the band together in the mid- to late 70s and find the right combination of musicians and then the following years in which the band exploded out of the NWOBHM underground and took the world by storm. As the title of the book suggests, Daniels primarily focuses on the first four albums by Iron Maiden as well as the many singles and EP releases that came out between 1979 and 1983, but the book does contain a rather interesting and well-written postscript in which Daniels briefly summarizes the remaining years of the band’s career up until the present. All the trials and tribulations relating to the years 1975-1983 are touched on, but Daniels tells it all with a lot of warmth, soul, and charm…like a genuine fan would, I suppose. Nothing seems rushed and, as I stated earlier on, the book is very well-researched, especially with respect to release- and tour-dates, line-up changes, the subject matter of the songs, who and what inspired the band to compose certain pieces, how Maiden and producer Martin Birch developed their inhumanly brilliant artist-producer relationship, and so on and so forth. There is loads of stuff here to delve into, ladies and gentlemen. Oh man, if you are a fan of those early Maiden records you simply need to read some of the stuff that Daniels has uncovered.

As much as I love and cherish "Killers – The Origins of Iron Maiden: 1975-1983", I realize that some fans or casual metal heads or whatever might find it a bit strange that Daniels only focuses on those early years of the band, but let me assure you that the years 1975-1983 and the humble beginnings of Iron Maiden make for some VERY interesting reading. While some might be a bit put off by all the dates, names, and details that are included in the book, I am personally of the opinion that it simply shows how devoted Daniels is to getting everything right and presenting as many facts as possible. I dare say that "Killers – The Origins of Iron Maiden: 1975-1983" should appeal to both fans of the band and readers who are interested in the early history of heavy metal and some of the most inspired and inspiring albums to ever see the light of day.

DESERT NEAR THE END – Hunt For the Sun