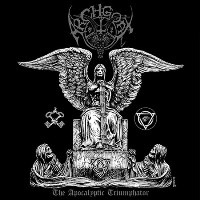 Finland’s Archgoat have always been a band who followed their own darkened path and their sound has therefore developed into one that is extremely developed and individualistic. Its roots lie in bestial death/black metal of the primitive school, but often played at doomy lower speeds. The overall effect is hypnotic and ritualistic, creating a heady atmosphere of smoke-filled crypts piled high with human bones. At the same time, the music allows the listener to rock out in the same way as the very earliest proto-BM acts did. A heavy reliance on mid-paced blasting further contributes to the band’s original and highly recognisable sound.

‘The Apocalyptic Triumphator’ is Archgoat’s third full-length release and the pinnacle of their artistic expression to date. In short, this is the best thing they have done. There is very little in the way of noticeable development as far as their sound goes, but everything is just that little bit better than ever before. The riffs are more compelling. The atmosphere is that little bit more smoke-filled. The bells are gloomy and discordant, ringing in a new era of death and doom for humanity. The sado-magical portal is open. Step right in…