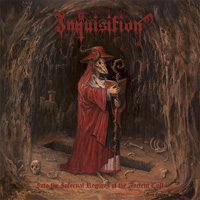 INQUISITION – Into the Infernal Regions of the Ancient Cult (re-release)

Up next is the re-release of the debut album from Colombian kings of Black Metal Inquisition. There is no difference to tracklisting or mastering and no bonus tracks but the cover has been considerably upgraded and the theme and artwork is planned to be continued on future re-releases this year.

Inquisition are one of few bands to have bought such a fresh and original direction to the standard BM approach. In their earlier days a helping of Bathory made it into the mix. There was also quite a strong rhythmic element which mirrored a similar vibe from Greek BM of that period. Also, Inquisition were among the pioneers of the detuned cosmic BM sound.

Dagon’s vocals have always been a massive draw. Compared to Shagrath’s frog croak and Abbath’s hell bleat, but actually quite original and distinctive in their own right, they make Inquisition instantly recognisable. As ever, the mix of material is perfect, some fast, some mid, some slow, but all mesmeric and engaging. The faster passages go for speed rather than power and heaviness, but this approach works well with the type of song structures.
‘Into the Infernal Regions of the Ancient Cult’ remains one of the best BM releases of 1998 and has actually borne the test of time better than most, so it is still worth digging out of the crypt. I honestly can’t imagine that anyone into extreme metal would not like this record. For those who missed out on this gem first time around, now is the time to fix things. Enjoy!