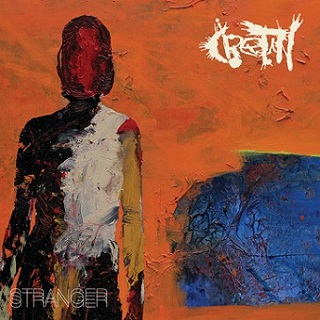 ‘Stranger’ is the second full-length from California four-piece Cretin. It featured on quite a few ‘Best of 2014′ lists, especially among the grind cohort. Having said that, the Cretin sound also contains a heavy dose of Death Metal, with Marissa’s vocals sometimes reminding me of early Chuck Schuldiner and the breakdown beats recall Autopsy at times. There are references to one of my all time faves, Repulsion, too (‘Mr. Frye the Janitor Guy’) but those bits make me want to listen to Repulsion rather than listen to more Cretin.
As far as playing and performing go, Cretin are solid as fuck – a brick in the face, as this type of music is supposed to be. The production is powerful and clear, not getting in the way at all. In terms of songwriting, Cretin have done a very good, but not excellent job. Hence, I never felt as if I really got into this record beyond the intellectual level. The songs just didn’t take over enough. So, I listened with a great deal of respect but never really warmed to this record or came to love it.

Overall then, a clearly above-average release that nevertheless failed to reach the bar. The guys compiling the 2014 lists need to go back and listen to Cripple Bastards ‘Nero in Metastasi’ again. Also Relapse, but an example of how a grind album can grab the listener, chain them to a radiator and saw their bits off.