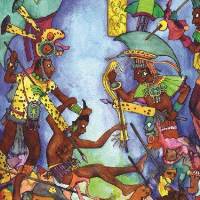 Volahn play a ferocious form of South American black/death metal, but as you can guess from the cover image, with a very strong vibe relating back to the historical roots of the culture of Central America. Imagine running blind through the black heart of the jungle pursued by jaguar-skin clad warriors who seek to capture your people to sacrifice them to their gods. That Mayan/Aztec atmosphere heavily pervades the music on offer here.

For a record so brutal, "Aq’ab’al" is interesting in that it also has a number of ambient, progressive and naturalistic touches, such as classical guitar, keyboards, vocal effects and some kind of pan pipes. These don’t impact on the brutality of the record, but complement it well, adding to the esoteric feel of the whole. These touches also contribute strongly to atmosphere and quite simply make the record a more stimulating and enjoyable listen.

These days it seems harder and harder to find a truly original-sounding voice in the black/death metal scene, so acts like Volahn are vital to keep the scene alive. Another home run for Iron Bonehead!