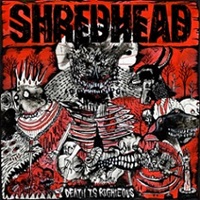 Israel is a country not just known for religious warfare, but also a hotbed these days in terms of domestic heavy metal bands. Shredhead is a thrash quartet, originally founded as The New Order in 2009 and changing names in 2011. "Death Is Righteous" is the second album from this four-piece, and the band intertwines a lot of Bay Area thrash fury with a modest amount of Pantera/Machine Head oriented ferocity and angst.

You’ll get songs such as "Walk With the Dead" and "The Lie" that contain a lot more of the side squeals, screams, and low tuned groove aspects that is more staccato, testosterone fueled versus the speedier, known thrash standards like "Last Words Are Lost" and "Hallucinations" that can rival a lot of the classic Exodus and Testament material through the years in terms of stop/start, finger blistering guitar-oriented octane power. Aharon Ragoza could easily be mistaken for a lot of Phil Anselmo or Robb Flynn’s range – if taken through a hard core blender. Whether it’s a mid-tempo number sure to launch bodies in the pit like "Can’t Be Left Alive" or a standard off the chart speed effort such as opener "Devils Race", Shredhead know both on a vocal and musical perspective how to keep things moving along dynamically and also entertaining.

Hammercult may be more appealing to my thrash senses, but do not discount Shredhead at this stage of the game, as I think they could get a lot of the younger teens to early twenty-somethings who need this sort of cathartic element to safely channel rage in the right avenue. 11 tracks in 42 minutes, "Death Is Righteous" has legs to carry itself far in the modern thrash world.