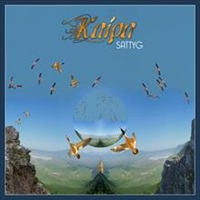 Swedish progressive rock with folk and fusion textures, Kaipa return for a 12th studio album in "Sattyg", and adventurous fans will rejoice in these 7 tracks. Opening with a 15 minute plus arrangement, "A Map of Your Secret World" contains guest whistler work Fredrik Lindqvist, a spirited instrumental start before quiet, acoustic oriented verses take over, and three vocalists who offer special story telling qualities of their own uniqueness male and female. Kaipa’s influence bank is certainly 70’s based- and shouldn’t be surprising considering keyboardist/ vocalist Hans Lundin started the band in 1973.

Also featuring The Flower Kings/ Karmakanic bassist Jonas Reingold in their lineup, the sextet possess a fluid chemistry that reminds me of the playful Jethro Tull, Genesis, and early Yes years – allowing every musician a chance to shine in the context of their given skill sets and strengths. The naturally playful instrumental sections of highlights like "World of the Void" and "A Sky Full of Painters" emphasize emotional delivery often over intricate expertise- sometimes the sparse notes and semi-jazzy aspects melding seamlessly against folk and electric passages. Drummer Morgan Agren and guitarist Per Nilsson deserve a ton of credit for pulling out all their bag of tricks to keep the material engaging, especially when half of the record consists of songs over 13 minutes each.

I know a lot of people in today’s multi-tasking, gotta get to it now mode of life can’t wrap their heads around a 69 minute album, but I think "Sattyg" does not bore the listener and uses all shades of quiet to bombast in order to engage the brain and body. Kaipa prove that the progressive rock genre has longevity and vitality, and this should be another mandatory must buy for those who have followed the style for decades.

MESSIAH’S KISS – Get Your Bulls Out!