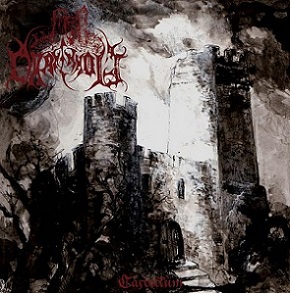 Darkenhöld hails from France and performs epic and medieval-themed black metal filled with mystical atmospheres, sweeping melodies, and bombastic parts. Strictly speaking, "Castellum" is neither an original nor an innovative release, but the musicianship is pretty strong and the majority of songs are quite well-written and catchy. Many of the melodies are melancholic and somewhat beautiful in certain ways, and I cannot deny that the music does invoke images and mental pictures of times long forgotten, which, I take it, is the objective of Darkenhöld. The use of keyboards is subtle in some places and quite prominent in others, which adds some variety to the whole thing while lending the album a symphonic touch as well. I like the use of percussion on the album, but the band could have used it a bit more and turned it up in the mix. I do wish the vocals were a bit more varied as that would complement the often shifting and dynamic music better, but sometimes you just cannot have it all. Still, fans of melodic and epic black metal ought to check "Castellum" out as it as a solid and interesting effort, and it is way better than so many other releases that try to pass as medieval-inspired black metal these days. Give Darkenhöld a chance!