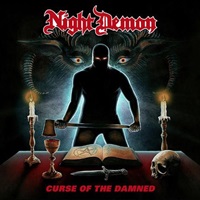 Much like the first heyday of the NWOBHM scene, it appears that traditional metal is gaining another ground swell of attention, and not just from British lands this time. California’s Night Demon are a power trio who convey a lot of the youthful spirit of those days on their debut album "Curse of the Damned". No extra over bloated intros open the record, as the first track "Screams in the Night" bursts out of the gate through guitarist Brent Woodward’s quick hitting riff that would make Sean Harris and the boys in Diamond Head proud… as well as their "Kill ‘Em All" Metallica offspring. From there we get another 10 songs that rumble, steamroller, and groove in that early 80’s template – sometimes Maiden oriented in twin guitar, bass thumping glory on "Full Speed", occasionally veering into slower, bluesy terrain a la "The Zoo"-era The Scorpions for the title track.

Veering midway through the album into epic ballad territory with "The Howling Man", this 6:47 cut contains a lot of the darker emotional melodies and heads down groove bass/ drum interplay that recalls Angel Witch during their self-titled debut period. Bassist/ vocalist Jarvis Leatherby has one of those comfortable singing ranges, in line with Vanderbuyst and High Spirits while not necessarily designed to shatter glass in the bird call area. You can be cruising the highways, the top down and hair whirring in the wind to classic Night Demon songs such as "Livin’ Dangerous", fiery guitar monster "Killer", or rhythmically oriented "Mastermind". Expect production values that are equally old school – the bass, guitars, drums, and vocals given the right separation so you don’t feel this ‘loudness’ war taking place.

Winning a lot of accolades in European print magazines, Night Demon channel the spirit of old and create some addictive songs of their own. Heavy metal will never die as long as three piece bands like this continue to spread the gospel, feed the fan frenzy, and fly the horns high. Look for the band to tour far and wide in support of "Curse of the Damned", and fully expect this to hit a lot of journalist (and musician) top lists even as we are early into the 2015 release schedule.