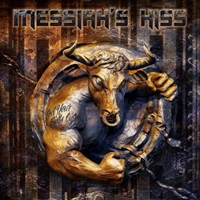 MESSIAH’S KISS – Get Your Bulls Out!

Taking a 7 year break to deal with significant health issues for vocalist Mike Tirelli (stage 3 stomach cancer) and guitarist Georg Kraft, the fourth album "Get Your Bulls Out!" from Germany’s Messiah’s Kiss contains a lot of the traditional heavy metal spirit and melodic hooks that they’ve been known for since their inception in 2001. The main record contains 14 tracks as multiple members of the quintet share in the songwriting, giving a wide scope of material from conventional hard rock to power metal and all shades of nuance in between.

You’ll get double bass power numbers like "Survivor (Take a Ride on My Heels)" next to something more Sunset Strip, bluesy based a la Devil’s Train for "Time to Say Goodbye". Then there are anthems such as the traditional opener "Living in Paradise" where Mike’s wide bluesy, multi-octave register sucks you in immediately and the Judas Priest-like "Mission to Kill" that features a slew of catchy riffs from the Georg Kraft/Jason Banks axe team and the rock solid rhythm section of bassist Wayne Banks and drummer Eckhard Ostra driving home the groove keep the pace of the record moving along at a moderate clip. "Symphony of Sin" features some delay effects and occasional nods to modern times, nothing overtly commercial but definitely a standout dynamically to most of the songs on this record.

There’s just something comfortable about good old German melodic metal: the textures, the development of certain grooves and hooks, the strong attention to memorable choruses, it makes songs like "Who’s the First to Die" (think classic Dokken here) or the wah wah fueled "Immortal Memory" instant appealers. The digipack contains 2 bonus cuts – an acoustic version of "Only Murderers Kill Time" and a modern sounding "It’s No Good" that has a provocative main bass line but feels very mechanical during the simplistic, repetitive chorus.

The time away hasn’t diluted Messiah’s Kiss in terms of ability and execution. "Get Your Bulls Out!" should be a delightful experience for those who love German melodic heavy metal with hard rock and bluesy flavoring.