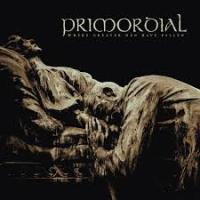 PRIMORDIAL – Where Greater Men Have Fallen

On first stepping into "Where Greater Men Have Fallen" I felt the gentle tug of disappointment. It sounds so much like ‘Redemption at the Puritan’s Hand’ and ‘To the Nameless Dead’ that it looked as if the Irish five-piece had made no effort at all to push the boundaries of their sound into new territory.

A further immersion proved the above paragraph to be both true and false. True because Primordial do sound here as they have for the last few albums. The production and feel are almost identical to these ears. But false because the band has moved forwards and developed in terms of song-writing skills.  Nearly every track features a subtle but inexorable ‘slow build’ and the ensuing pay off, be it a chorus or other point of climax, is as well crafted as anything the band has done to this point. It seems as if they have spread their net in terms of what is permissible in terms of influence and the catch-lines are that bit more commercial than they were on previous releases. And I do not use ‘commercial’ as a dirty word here. If it makes the songs that bit more accessible and compelling, then why not?

On the whole though, the duality endures to the end. Yes, "Where Greater Men Have Fallen" has moments of greatness and the tracks really do begin to show their merit after repeated, patient listening. On the other hand, the similarity to earlier works, both in terms of lyrical content and music, dampened my nascent enthusiasm a bit too frequently. So – yes, another good album by Primordial, but not the best place to start for those new to the band and not an essential purchase for the non ‘die-hards’ out there.