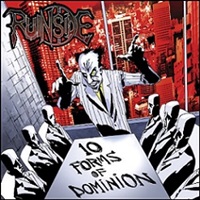 Fortunate to hear this Finnish heavy/thrash metal act’s debut record "The Hunt" from 2012, curiosity abounds regarding the follow up "10 Forms of Dominion". I remember their sound straddling the old school and new philosophies – artists such as The Haunted, Megadeth, and Sepultura came up, and you always wonder given a little more seasoning if a group is going to start venturing into their own sound or still rely on the tried and true influence grab bag that worked successfully the first time.

New bassist Pirkka Birkstedt makes his presence felt early by track three "Dethroned to Be Driven", given equal aural space in the mix a la D.D. Verdi of Overkill which helps cement the power riffs, gang oriented chorus, and pounding tempo into your brain. Occasionally using melodic guitar runs or left field bends sets up the main songs in an entertaining twist – check out the steady mid-tempo groove and point/ counterpoint power riffs from Kimmo Jankkari and Erno Tarvainen on "Corridors of Power" where the pace picks up on the whammy bar oriented lead break.

Vocalist Toni Salminen has one of those interesting, melodic ranges that can cross doom, power, and thrash lines. Not one particular vocalist comes to mind, but I still hear inflections of Charlie from Morgana Lefay, Glenn Danzig, and maybe Ville of Poisonblack/ ex-Sentenced – be it on a slower, mid-marching effort like "Dancing to the Demon’s Tune" or something head crushing such as "Checkmate", he has the perfect voice for this set of songs.

For those who appreciate acts that straddle the lines of true power and thrash, "10 Forms of Dominion" will be another album to meet your approval. I doubt the band will ever attain large theater headlining ranks, but they perform a street level style that can gain much favor from fans of Metal Church, Megadeth, and Morgana Lefay fans.