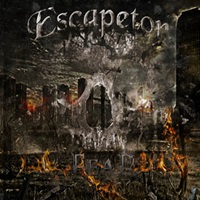 Active since 1999, Escapetor is a Norwegian quintet who fuse together elements of thrash, speed, and heavy metal on their second album "Fear". Their first full length "Moments…" came out in 2005, and since then they’ve released a couple of EP’s and gone through some member changes. Vocalist Claudius Bormuth joined in 2012, and their latest bassist Dan Gundersen came into the fold earlier this year. Being my first exposure to their sound, these 12 songs have a lot of dynamic appeal in all facets: vocally, musically, and structurally.

Check out the bluesy riff and "Come Together" / Beatles oriented groove that makes "Unknown Thoughts" an easy toe tapping number to gravitate towards or their closing cover of Johnny Cash’s "Folsom Prison Blues" done in more of a punkish/thrash manner to know Escapetor isn’t your stay in the box metal act. Many songs just come out and throw down furious double bass and razor sharp riffs – opener "The Queen" and the title track two of many, while slower efforts such as "Dealing with Fate" and "Time" have more in common with Metallica or Testament during their later 80’s periods.

At times Escapetor lose my interest because the main riff doesn’t develop into an interesting hook – and Claudius has a voice that is a little rough around the edges. Charlie Rytkönen of Morgana Lefay comes up early and often, if gurgling sometimes underwater, on "Dark Past" and the head banging "Creatures of the Night". Where I think Escapetor distinguish themselves is their knack for inject old rock and roll chord structures and grooves into their speed/thrash/ heavy metal base – almost taking a tip from Volbeat in that aspect.

Maybe the third record will tighten the ship a touch more – for now "Fear" is adequate but not outstanding.