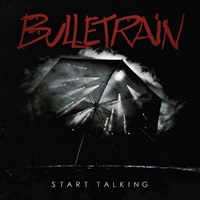 Climbing up the ranks over their eight year career, Sweden’s Bulletrain are a five-piece act taking over the airwaves in another glam/sleaze-oriented hard rock offering through their debut album "Start Talking". Big choruses, hard hitting happy chord combinations and 12 songs that remind me of the Sunset Strip 80’s heydays meets Scandinavia’s current crop of bands paying homage to that bygone era is what you’ll get.

Bon Jovi, Skid Row, Guns ‘N’ Roses, and Mötley Crüe are four bands that come to mind on street anthems and commercial oriented offerings that hit that aural sweet spot – "Dark Days (Dark Nights)" has a little bit of that "Lick It Up" charisma, while the title cut is very funky and employs proper use of the almighty cowbell. Robin and Matt offer up great on point rhythms and spirited lead play that moves beyond bar boogie into the type of work ready for arenas – check out the acoustic and electric blend on "Phantom Pain" and the extended, moody instrumental section that ends the 6 minute "Bad Blood" for proof that these gentlemen love heavy metal dynamics as much as they do melodic hard rock.

Sometimes you just need music as a release – nothing that is going to make you exert brain matter or require a large investment in terms of time. "Start Talking" is one of those platters that rocks, sure to appease both genders, and leaves people smiling rather than crying. Who would have thought that three decades beyond the glory years of this movement that newer acts will carry this to future generations?

HELL IN THE CLUB – Devil on My Shoulder