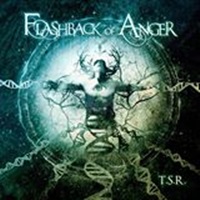 After a debut album in 2009 "Splinters of Life", Italy’s Flashback of Anger dealt with a series of lineup changes (bassist Andrea Torricini joining in 2013, lead guitarist Andrea Anichini this year) and securing a new record deal. What we have here on "T.S.R." (Terminate and Stay Resident) is a 10 track album in the melodic power/ progressive metal vein – something very prevalent in their country’s scene, so what differentiates this quintet from the hundreds of others down the pike?

I’d start in the guitar tone- throughout songs such as "False Idols" and "Shattered Promises" you’ll hear guitarist Gianmarco Lotti and the aforementioned Mr. Anichini deliver smart riffs and licks, yet accenting certain instrumental sections with this heavier, beefy presence – making sure that things still stay metal amidst all the dazzling interplay and progressive technique at hand. When keyboardist Emanuele Giorgetti joins in the mix, there’s a sense of neo-classical edge and natural groove that comes from their love of pop/dance groove. Speaking from a vocal perspective, Alessio Gori isn’t afraid to hit high falsettos, but also be reflective, restrained, and tender in a lower register as "My Angel" weaves a ballad-oriented framework and transforms into something I could hear in live, dramatic Broadway plays- heavy on orchestration moments. Seeking out the ever-present Fabio Lione for a duet appearance on "Hiroshima & Nagasaki", the almost 8 minute track is a definite highlight from both a vocal and musical perspective, a marriage of power riffs like Gamma Ray with the bombast of Rhapsody (Of Fire) and depth of all sides Angra.

"T.S.R." appeals to those who want a band that is more than just doling out the same syncopated stun runs that established Dream Theater as the premiere progressive metal band. They aren’t afraid to let the bass work of Andrea Torricini make an impression on "Gynophobia", and the vocal harmonies during the chorus rival the latest Secret Sphere recordings in terms of memorability. Let’s hope that this re-establishes the group’s presence on the scene, as I can see Flashback of Anger ascending the ranks to break from the Italian pack. Well done, and a good investment for the majority of the power/progressive metal fans.