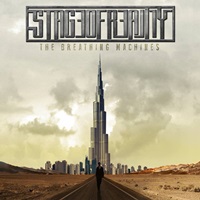 Ex-Blaze Bayley guitarist Andrea Neri (for 3 years in a live capacity across Europe) started this new Italian band Stage of Reality as a power hard rock band. The debut album "The Breathing Machines" is a 10 song conceptual record, almost George Orwell-ian "1984" oriented where humans are merely terminals of society, without feelings, opinions, or thoughts of their own. Vocalist Francesco Marino has a versatile voice, employing industrial-like nuances on the opening title cut, but very funky and personality driven on early highlight "Good & Evil".

Not one particular band comes to mind when looking at Stage of Reality from a musical perspective. They have a melodic sense during the choruses that has current Europe in mind, but at the same time I can hear Red Hot Chili Peppers, classic Ozzy, even Queen at certain turns – as well as some twists that would be in the modern rock vernacular. You’ll get softer, almost Police-like clean picking during the atmospheric "Five Senses" and keyboard/ cyber-elements that border on 80’s synth-alternative masters Depeche Mode careening headlong into heavy rock on the 11 minute plus "Mindless"- which keeps the ears perked up for what will take place next over the course of this almost hour long journey.

I must admit that "The Breathing Machines" is probably one of those albums that most listeners will need 3-5 exposures to truly get – but once they do, I think they’ll dig deep into the treasure trove of inspiration and creativity on display. Stage of Reality is off to an amazing start- and I’m intrigued to see where they will take us next. Heavy rock that is thoughtful and features amazing musical quality – more bands should look to this as the barometer for the genre.