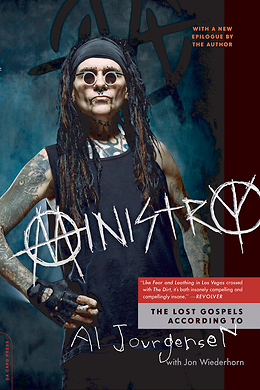 Ministry – The Lost Gospels According to Al Jourgensen is one hell of an interesting biography that beautifully captures and chronicles the turbulent, chaotic, and downright insane life of Ministry mainman Al Jourgensen. To tell you the truth, I have never been a major of fan of the works of Ministry or of Jourgensen’s side projects such as Revolting Cocks, Lard, or Buck Satan and the 666 Shooters, but none of that matters, because this book is so entertaining and out of this world that I could not put it down once I started reading it. This one is truly one of those biographies where I continually had to re-read certain passages just to make sure that I had actually read what I had, and there were many times when I could not help saying "Wow", "You are kidding me", or "Holy shit!" out loud in disbelief.

I do not want to give too much away regarding the content of the book, because the reader should experience the whole thing and take it all in on their own, but…well, to be honest with you I have no idea how to convey just how sick and depraved some of the stuff contained within this biography really is. Some of it makes that Motley Crue biography entitled The Dirt look like a Sunday picnic. I kid you not! I cannot for the life of me figure out how and why Mr. Jourgensen is still alive and breathing when taking all the mayhem and (self) destruction listed and detailed in this book into consideration. Jourgensen tells it like it is and seems neither afrair nor ashamed of stating just how tumultuous his career has been, how destructive his behavior and way of life was, who cheated and fucked him over, who helped and supported him in relation to him battling addiction(s), the phenomenon that is Ministry, and so on and so forth. The whole thing just seems so sincere and honest, but in no way does it come across as some crappy and annoying glorification of drugs or junkies or anything of that sort. The thing is that there is so much humour, sarcasm, and irony present throughout each and every chapter that even the most unbearable tragedies and unspeakable acts that Jourgensen has encountered (or been the cause of!) are somehow rendered entertaining and yet thought-provoking. There is a lot of heart and warmth in places, too. Everything just kind of flows and the pace at which the story unfolds is near perfect.

As with the recently released biography of Scott Ian (Anthrax), one does not need to be a die hard fan of Ministry or Al Jourgensen in order to love and cherish this book, that is for sure. Ministry – The Lost Gospels According to Al Jourgensen is an extremely compelling piece of work that is both hauntingly dark and strangely uplifting at the same time. I strongly recommend this excellent biography!