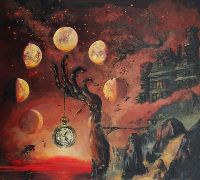 OCCULTATION – Silence in the Ancestral House

Occultation have proved with their debut "Three & Seven" that they master this retro vibe of occult hard rock inspired by 80´s bands like Witchunter General and Coven.

Occultation hails from NY and like their peers The Devils Blood and Huntress they are female fronted, plays a sort of doomish rock and keeps their themes in the darker shades of life. As their name implies they focus on the occult and on their second full-lenght "Silence in the Ancestral House" they follow up their debut from 2012 quite well.
Their music flows really well and vocal fits the music very well.
Where bands like Ghost maybe incoroporates a little to much pop in their arrangements, Occultation balances the softer parts with the more heavy parts perfectly without getting lost.
The trio manages to stay interessting and mystic and the album gets better after each spin. Personally this is music that often seems to get boring after a while but Occultaton´s "Silence in the Ancestral House" manages to stay inside the comfort zone even after three consecutive spins in a row.

If you like the bands mentioned earlier you should give Occultation a try, they may even keep you up at night if you frightend easily.