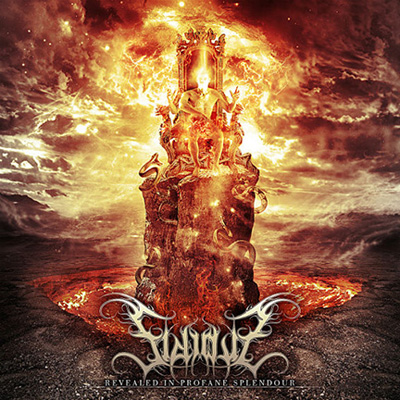 The album reminds somewhat of Behemoth some years ago. The whole blackened death metal sound reeks from the whole album, and that is not a bad thing. The album’s sound is consistent and over all quite enjoyable.

It starts off with an amazing drum part in "Sacrilegious Majesty", wich later becomes a very standard blackened death metal song. A lot of cool rythms and choir parts follow the dark melodies and this makes the track quite big.

"Inecorable Revelation" is probably the track on the whole album that contains the coolest bass lines, as well as some of the most amazing riffs. Over all, this is one of the most "complete" songs of the lot.

The title track of the album is, sadly, one of the tracks that fall a little short. A bit more forgettable than the other songs, though not a bad song, just a bit too standard. A little bit too cheesy guitar solos and not too interesting melody-wise. The druming on the track, on the other hand, was top notch.

"Anihilation of Abhorrent Credence" starts up with a very ambient tone, that feels very much like an industrial mine. It cuts right over to an extremely heavy track, which contains some of the more awesome drum and guitar parts of the whole album. An absolutely lovely experience to hear the growling and shrieking vocals give so much power to the track. And not to mention the amazing clean part!

What a band that uses the (extremely cheesy) word "ov" should know, is that if you are going to use it, then please use it consistantly. You can’t use both "of" and "ov" on the same album, because it just looks silly. When that is said, "Obscenity ov Old" is one awesome track. Powerful and a lot of heat, as well as dark vocals (accompanied by some cool, light vocals in the background). The sound of this track is quite amazing.

"Infernal Reign" is the second longest track on the album, and also one of the slower pased ones. At least melody-wise. The song gives itself alot of time to build up, and manifest. Sadly, when the build-up is done, it stumbles a bit and ends up as one of the more generic tracks on the album. The choir parts give the song a bit more to work with, but not nearly enough. The best part of the song is around four minutes in, where there are some clean parts, and the drumming picks up twoards the end of the track.

"O paragon, Bringer ov Light". Again with the "ov" in the title. Another calm track (if you compare it to the rest of the album atleast). The song seems like a good sum up of the album, since it contains alot of the best and worst parts of the other songs. The guitars have their high point at two and a half minute in to the song.

When all is said and done, this album was incredibly enjoyable. A lot of powerful parts and a good production serves this album well.