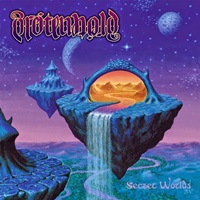 Struggling to find much information regarding the lineup of this band – outside of the fact that they are Swedish, play a form of ripping speed/ power metal and contains Rocka Rollas guitarist/ vocalist Ced among its membership. No matter though, as based purely on these 11 tracks alone for "Secret Worlds" this is prime time old school style, injecting early Helloween, Blind Guardian, and Running Wild into the mix – fueled by harmony and melody during the lead breaks.

Those who live for the steady double bass rattling, stop/ starts that just pile on the jackhammer power/speed riffs and Ced’s very helium oriented vocal melodies will savor "To the Battle Far Beyond", "Hour of the Dead", and the 7 minute moody epic "Legions of Breitenhold". Closer "Thunderstorm Arise" features guest female vocals from Crystal Viper’s Marta Gabriel, aiding Ced in a back and forth vocal attack that resembles a speed cage match. Even the small interludes that last a minute or so such as "Neverending Nights" and "One Last Farewell" give the listener introspection and respite from the next barrage of hard hitting power metal at hand. Right out of the gate on "Time Is Gone" the cultural twin guitar harmonies set the tone, while the larger than life mead hall choruses encourage that tribe/ warrior mindset.

So overall if you love Rocka Rollas, or late 80’s speed/power metal the Teutonic way, Breitenhold will meet devil horns approval. Ced has three different bands going (Blazon Stone is his third), so if the creative juices continue to flow, that’s to the benefit of his fans in the long run.