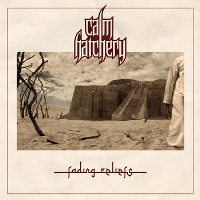 Polish Death Metal crew Calm Hatchery may not be on many people’s radars, but perhaps ‘Fading Reliefs’ will be the record to change all that. First off, you have to overlook the rather understated cover. Not only is it not pretty, it also isn’t very ‘death metal’. Secondly, you might have to battle with the question – ‘Who the hell are these guys?’ For whatever reasons, we know their cousins Decapitated, Vader and the mighty Behemoth, but many of us, myself included before this came my way, had never even heard of Calm Hatchery. Perhaps the name hasn’t done much to help – sounding like a crèche for molluscs (Clam Hatchery???) is not going to going to do much to help anyone’s career.

You might notice that none of these objections had anything to do with the music. That is because, quite simply, there is nothing to object to. Stylistically CH’s approach might feel a little ‘middle of the road’ at first. A little too much like Goldilocks DM – not too heavy, not too fast, not too brutal, not too technical… you get the picture. The only thing of note is (as the cover might have hinted), a slight eastern influence. But personally that all works for me, because CH are all about the songs. As so often happens in modern DM, we have heard much of what CH have to offer before, but what makes it special is how well the whole thing is put together and executed. The musicianship is faultless – easily up there with their better known peers from Poland. The song-writing is tight too – the rhythms compelling and the riffs and choruses all hit the mark. Musically, there is a lot more going on than might first appear and the fact that everything is so well done tells us that CH are a band worthy of note and respect.

Of course, if Calm Hatchery changed their name to I Killed a Hooker with a Penknife and went for a full colour cover they’d probably become one of Poland’s biggest DM exports by 2015. The music wouldn’t need to be any better -it is already good enough for that to happen as it is…

OCCULTATION – Silence in the Ancestral House