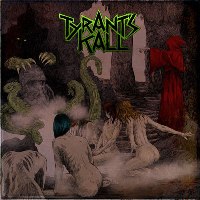 ‘Dagon’ is the debut release from Belgian doom thrashers Tyrant’s Kall, originally put out in 2012 independently, but now available via the good folk at Witches Brew. Stylistically, we are looking at something heavy and rocking – something like Funerus but with more touches of speed and a greater influence on groove-laced epic metal that recalls Cathedral/ Acid Witch at times.
Vocalist Mieke does a great job. Her DM vocals work well and although her clean vocals lack power, they suit the vibe and add a refreshing, original aspect to the music. Of course Tyrant’s Kall get extra points for their reverence of all things Cthulhu. Who am I to go against the Elder Gods? The atmosphere pretty much matches the cover artwork and what you’d expect from this kind of release.
As usual it all comes down to the songs and how good they are. And yes, they are fine and this is an enjoyable album that I find myself returning to often. It is just a good place for my ears to be. Ok, it isn’t going to change the of face death thrashing doom, nor will it make Belgium a world leader in metal exports – but then again, it doesn’t have to does it?