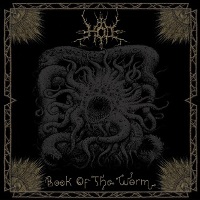 ‘Book of the Worm’ is the second full-length from US blackened death metal act Hod. That’s right – Hod is the name – not H.O.D. as some might expect.

Musically, we are looking at something dark and brutal – a little like Impiety in feel. The sound isn’t as murky as we have seen on lots of these types of release lately, meaning that although in genre terms ‘Book of the Worm’ is fairly close to some of the recent output from South American black/death hordes, the sound distinguishes it. The guitars have an acidic quality that works well.

Other than that though, I’m not a great fan. The songs don’t stand out too much, the riffing is good at times, but not enough to wow, and overall this is just a little too underwhelming. To be honest ‘Book of the Worm’ just makes me want to listen to Nocturnal Graves latest. Exactly the same thing but done so much better.