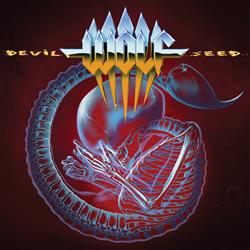 There is something so amazingly frustrating about heavy metal. It can deliver majestic, generation defining material just as easily as it can deliver contrived, uninspired cliché after cliché. It is a genre that can be painstakingly serious one moment, then childishly playful the next. Not to mention that within this one genre you can have fast-paced neck breakers and sleep inducing power ballads on the same album!

So it was with a sense of cautious scepticism I sat down and listened to Wolf’s latest effort ‘Devil Seed’. The Swedish heavy metal quartet have reached their seventh studio effort, and from what I’ve heard of the band’s previous efforts, they do quite well with the aforementioned neck breakers. Their lyrics seem to mainly focus on some sort of anticipatory paranoia, death and/or destruction. ‘Devil Seed’ is no different.

The album starts with an instrumental effort before launching into the fastest and heaviest track, ‘Shark Attack’. Its ripping riff and catchy sing-a-long friendly chorus makes this a perfect live anthem, and it’s the definite highlight off of this album. From there it’s all down hill; both quality and pace wise. The album offers four consecutive slow paced songs, which while fitting into the genre of heavy metal is faraway from the speed and intensity of ‘Shark Attack’ and ‘Skeleton Woman’. While I wouldn’t categorise their venture into the slower side of things as terrible, it’s certainly not anything to celebrate either. The lyrics are decent, but the musical aspect is dull, and as you’re offered four consecutive songs in this same vein, you might feel a bit numb by the end. It’s a remarkably steep decline from the two relatively fast paced efforts in the opening duo of ‘Shark Attack’ and ‘Skeleton Woman’, and the album never reaches those speeds again. Though it does close off nicely with ‘Killing Floor’.

Overall, as a collection of songs ‘Devil Seed’ is a decent effort. It offers some heavy songs, some slow, some good, some bad. The album suffers from pacing issues, and a distinct sense of repetition. Their slow paced quartet feels remarkably similar, and the majority of the album’s 11 songs feel familiar, like you’ve heard them multiple times before. The individual songs are never terrible, but the pacing of the album makes ‘Devil Seed’ a dull effort; both creatively and musically. It never seems interested in pushing the fans expectations of what Wolf as a band is capable of. Sadly this makes the Swedes’ seventh studio effort a disappointing one. They are capable of better things, and I suppose that standard is what might’ve doomed ‘Devil Seed’ as a creative venture. While it would’ve been acceptable as a debut effort, or even a sophomore album, once you’ve been putting out quality heavy metal for over 15 years, people tend to expect certain things, and this sadly didn’t deliver.