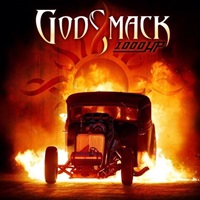 True story: back in the early stages of this Boston band, I had the opportunity to witness an opening set from them supporting The Organization (ex-Death Angel) at the Rockpile in Saugus, Massachusetts. At the time, they had a horn section in their band, attempting to fuse together hard rock with the Mighty Mighty Bosstones. A year later, with an EP that received all day airplay on the major rock radio station WAAF, there were stripped down to the bare hard rock essentials, no more horns, and aligning themselves for superstardom. Godsmack has toured the globe, received numerous multi-platinum records, topping the charts since signing to a major label in 1998.

Taking an open ended break as they were burnt out on each other and the year in, year out record/ tour grind, "1000hp" is their sixth studio album and first since 2010’s "The Oracle". The brand of aggressive post-grunge hard rock/ alternative modern metal they play has a lot of Alice In Chains, Aerosmith, Metallica, and Pantera nuances – hooks are coming at you from a tempo and riff perspective, choruses are easy to ingest and cement in the brain, and the music just rolls over you to take daily frustrations out in a healthier manner. This particular album is a tale of two halves: many songs early on have a punk-ish outlook such as the opener title rev it up number, and "What’s Next" that lobs out slow haymakers through Sully’s militant vocal delivery and the half-time Shannon Larkin drum swing. The fifth song "Generation Day" is a 6:22 masterpiece, very moody and containing a Big Country ‘shot’ refrain out of Sully circa the hit "In a Big Country" and a slow churning riff that takes a left turn mid-stream into more atmospheric/ acoustic instrumental work before kicking back in to electricity and low end grooves for the final minute.

"Locked & Loaded" and "I Don’t Belong" are prototypical Godsmack songs – bouncy, big riffs and Sully’s sinister low vocal edge with occasional punctuated screams carry the load. So you get 11 songs and 50+ minutes of current music – professionally executed as the band is prone to do – but I doubt the deeper hard rock/ metal follower still cares about Godsmack. If you like the commercial side of modern rock radio these days, "1000hp" will thrill you – otherwise this is predictable, safe, and not worth much of a cursory look.