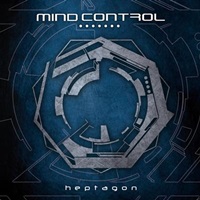 Ah, glorious progressive death metal – how much I miss your shape shifting segment changes, intricacies, and bevy of moods/ feelings that can come across through one full length album. Italy’s Mind Control are a newer act to these ears performing in this style, and on their debut album "Heptagon" throw some intriguing music our way through the 7 songs in the main (discounting the brief 28 second "Zero" intro) in a tidy 45 minutes.

Two vocalists tackle all the word delivery, and Simone Evangelista is the screamer/growler while Simone Alberto Grifone is the clean compliment, filling up the aural landscape on "Visions" and "The Civilization" furiously and beautifully, all depending on the respective riffs and moods the band wish to portray. Drummer Luca Nicolucci has an interesting jazzy segment on the aforementioned "The Civilization", building up the instrumental elements as guitarist Massimo Boffa and supplementary horn/ keyboard parts filter in for extra entertainment value.

As far as stylistically where Mind Control are coming from, I consider the emphasis more on the progressive metal side, as the death sections appear in terms of the extreme vocals and occasional up tempo rhythms. Acts like Fates Warning, Symphony X, and Opeth come into the forefront, although a lot of the atmospheric, quieter, and clean sections can be seen from a jazz/ AOR context. The band also have thrash roots, as two of the five previously played together in a local thrash act called Halley – but overall command your attention because they don’t overpower their material with too many segments, preferring to hone in on 4-5 great riffs and build off them. Check out the roller coaster speed to semi-doom oriented title track and harmony fueled meets power swinging "Seven" (featuring some sweet piano solo parts) for the best Mind Control has to offer.

A fascinating debut, "Heptagon" has so many sides to take in, and that’s what makes this special for all progressive metal fans to treasure.

MIDNIGHT – No Mercy for Mayhem