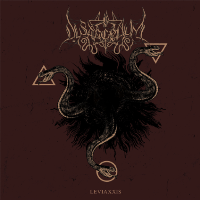 Up next is this 3 track demo from German black metal quartet Dysangelium (Not to be confused with a band of the same name from the Czech Rebublic). Again WTC have gone for a limited tape only release, which makes about as much sense to me as rubbing your nob on a cheese grater, but they probably feel it makes the offering more kvlt.

This is some pretty excellent modern black metal. The sound eschews the more recent trend for churning chaos and instead focuses on tracks that are fast, tight and memorable. The production is clear and balanced, so not much going on in the necro murk department, but ‘Leviaxxis’ still manages to be atmospheric thanks to the songs themselves. The ritual feel of some of the slower parts brings to mind Chaos Invocation, which as anyone familiar with those guys knows is high praise.

A big thumbs up from me for a band I will definitely look out for when they release something longer and on a format I hadn’t moved on from by 1989.

MASTODON – Once More ‘Round the Sun