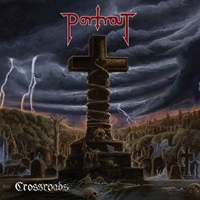 Anyone remember the Mercyful Fate revival of acts that came on the scene a few years ago? Portrait would be one of those Swedish bands gaining a lot of credibility based on their two previous albums "Portrait" and "Crimen Laesae Majestatis Divinae" for taking the evil heavy metal influence of that 80’s band to a new generation of fans who clamor for darkness, multi-faceted vocals with shrieking operatic falsettos and those mighty, glorious riffs that bleed for the genre. Album number three in any band’s career tends to be a pinnacle release- the one to separate the elite from the wannabes. So where does "Crossroads" stand in the grand scheme?

Fortunate for the fans (or newcomers), the quintet from Kristianstad keep the heart on old school grooves, appropriate time changes (check out the shift at 3:58 of "At the Ghost Gate" from a mid-tempo march to thunderous Maiden-like majestic spider web instrumental awe) and the right amount of twin harmonies throughout to get audiences cheering, clapping, and singing in unison. Tracks like "We Were Not Alone" and the stealth "Black Easter" should send shivers down many a spine, the bass work from Cab Castervall an important part to the Portrait plan- beyond the mountaintop passionate pleas sent from singer Per Lengstedt.

Not all is strictly worshipping at the altar of Mercyful Fate – "Ageless Rites" features a main riff that could be a distant cousin to "Bark at the Moon" era Ozzy, while the 9 minute closer "Lily" has a lot of that magical, mystical arrangement outlook that made early Rainbow and the Scorpions perennial favorites. It’s as if the touring sessions over the past few years have allowed Portrait to develop at their own pace, knowing how to hone in on the right elements to create memorable songs that still have contrasts in dynamics and become future classics of heavy metal.

At 42 minutes "Crossroads" should keep Portrait at the top of the heavy metal game – and hopefully put to rest any more their validity as their own entity in the scene.