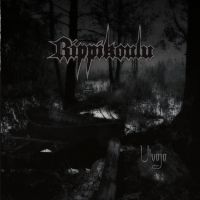 Finland’s Rippikoulu are probably best known for their monstrous 1993 demo ‘Musta Seremonia’ (recently re-released by Svart and reviewed on ET). There are many who hold this to be a classic of early Finnish DM, and rightly so. Sadly, Rippikoulu guitarist Marko Henrikssen died shortly after that was released and the band, unable to recapture the magic of those early days, split.

Fast forward 21 years and three tracks arrive at the office of Svart Records newly minted by a reactivated Rippikoulu. Once again we have the ultra-slow, slightly symphonic death metal – super heavy guitars coming at you through a wall of grey fog with touches of keyboard here and there backed by graveyard vocals. Only this time around the proto-grindcore fast sections are absent.

The ultra heavy groove works well and ‘Ulvaja’ drips with atmosphere. This time around, the songs still have an element of catchiness, but the songwriting feels more mature and measured – is there such a thing as ‘post DM’? And yes, this isn’t as catchy as Rippikoulu were before, but that is part of the approach and the emphasis is on a more epic feel (which they achieve!).

Overall this is great stuff and I look forward to seeing the band find their feet and put out full-length (or hopefully a double album – they like long song structures so why not?). I do miss the brutal speed, so it would be nice to see a return of that aspect too. Worth a try and make sure you don’t miss out on ‘Musta Seremonia’ too! The link for that review is below: